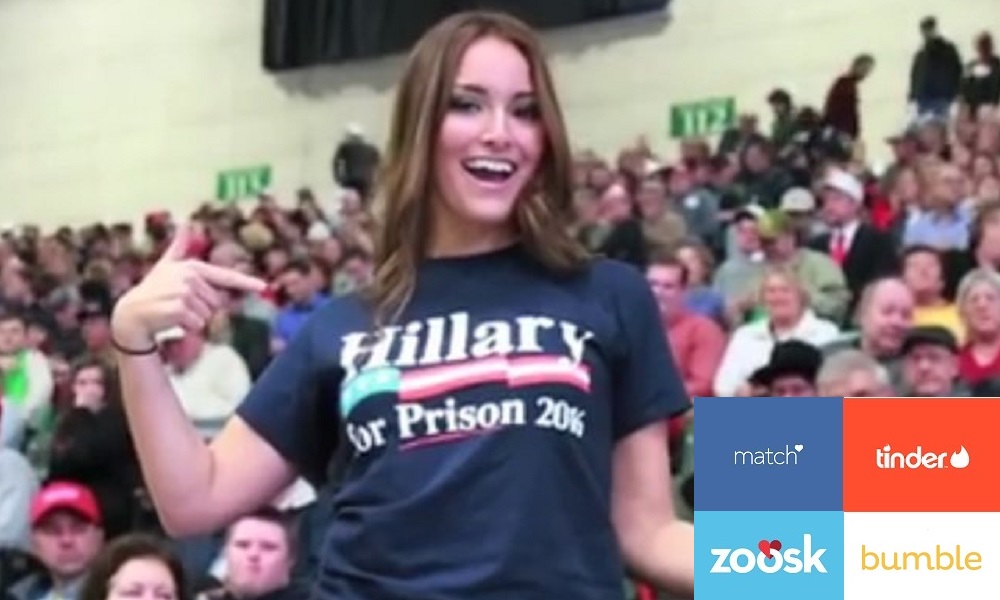 I happened to turn on Fox and Friends the other morning and saw a story that I could not believe what I was hearing. It seems that more millennials would rather date a convicted felon over a Donald Trump supporter. WTF have millennials lost their minds over who they choose to date ?

Less than one month ago, our contributor, Dating Addict, wrote a story about how people have taken sides, like political tribalism, and it can be a deal breaker in dating. This story appears to confirm what he said. One could say we broke the dating story first before Fox or they read our blog and sought to see if it was true.

Here is a link to the Fox News story, which speaks for itself. A couple of other news outlets, including MSN, The Daily Caller and Raw Story also picked up the story.

This begs the question, are these millennials serious or are they just blinded by their hate for the President ? Oh yes, he is after all the duly elected President of the United States. Aren’t we supposed to support the President, regardless of who he or she is ?

I think this sad state of affairs has part of its roots in the colleges that have a very liberal agenda and all but warn students that conservative views are bad. This assimilation into a biased culture has crept into dating and many other parts of our lifes. I am not taking sides here, but schools definitely shouldn’t take sides. Students should be allowed to make their own choices, not have some liberal agenda rammed down their throats.

Added to that is the extremely biased media. I for one am sick of hearing CNN, MSNBC and NBC just trash Trump 24/7. What about all the good that seems to be happening like the low unemployment and great economy not to mention maybe ending the Korean War after 70 years ?

So when you take the liberal, anti-conservative brain washing in schools then add to the total Trump hating news media, what to you get ? You get these millennials saying this non-sense.

So, let’s talk about what these millennials are actually saying ? Taking this literally, they are saying a rapist, murderer, sex offender, drug dealer, bank robber, etc. are all preferred dates over someone who just happens to support Donald Trump. Or are they really saying just certain types of convicted felons, like a non-violent while collar criminal. But the respondents did not make that distinction in their choice, just felons, in general, are better than Trump supporters.

I think the answer to the question of have millennials lost their minds over who they choose to date is Yes.

I could understand if someone was a racist or had extreme views about other social issues but just because they support a man who the people elected, really ? Even those racists who didn’t particularly like President Obama, because he was Black, didn’t use that as factor when considering what music they would buy or who they might date.

All I can say is these dumb asses who keep screaming that everyone is a racist or we are so divided should take a closer look as to how schools are indoctrinating kids and flip the news channels to see that there are two total opposite perspectives being reported.

Don’t get me wrong, I voted for Bill Clinton and Obama. And yes, I did vote for Trump. But have millennials lost their minds over who they choose to date ? Most definitely !

Submarineing, The Latest Dumb Ass Dating Trend
To Top
Sorry to see you go. Don't miss out on Monthly Insights - Coming back soon !